For those who are interested here are some notes about the plaster we applied to the drywall panels behind the sculpture. The museum mounted the panels for us leaving ¼ inch depth from the surrounding frame. I wanted to do this because we frequently get questions about plastering over drywall or similar surfaces. All to often I watch people run out and buy what I would consider to be excessively expensive pre-mixed clay plaster products when it is so simple to replicate those mixes at a fraction of the price.

The Mix – It was pretty simple – 1 part C Red clay from Laguna Clay, 2 parts 60 grit silica sand, ½ part chopped straw that was screened using 1/8 inch hardware cloth. The water used to prepare the mix was prepared with 1 part concrete bonder to 7 parts water. This gave the surface of the plaster a little extra hardness and provided the adhesion needed between the plaster and the drywall. It’s possible to use other natural glues, some people like wheat paste, I personally don’t because it makes the mix perform differently and can make the finished surface splotchy in color. I much prefer rice starch powder that we buy from a firecracker supply outet – www.skylighter.com I’m sure it’s available from a number of other sources. We also make it from scratch using glutinous rice flour, but when traveling, the ready to go powder is preferable. Casein is another option that I love, but again, travel makes it somewhat tedious to prefer unless a pre-mixed powder with lime.

Laguna is one of the biggest suppliers of ceramic supplies. They sell both plain powdered clay as well as clay bodies, that include other ingredients for specific purposes. We usually go to an outlet that provides materials for ceramicists and see what they have in the way of powdered products and typically select a color that is close to what we are looking for. From there it can be adjusted somewhat with a pigment, but the results never seem to be the same as using the clay by itself. Some of the clays/clay bodies that we often use form Laguna include Mohave Red, EM 215, Newman Red, Blackbird.

I don’t remember exactly what the square footage of the wall panels was that we did in the museum, but my memory says something around 300 sf. Given that we used about 1 ½ bags of the C Red at $17 a bag – a total of about 75 lbs, another bag of a clay called Mojave Red which we used as part of the first coat application. Price is about the same. Keep in mind that we applied the plaster thicker than we normally would due to the ¼ inch depth of the molding around the drywall. Cost – $42.50. We used about 4 to 5 -100 lb bags of 60 grit sand at a cost of $6 a bag. Cost – $24. So total expenditure for the walls at ¼ inch thickness – $66.50 or .22 cents sf.

The only thing I can’t tell you about the mix above is the amount of water, I simply don’t remember. We usually eyeball it to get it where we want. What I can say is that if it doesn’t spread easily on the wall, it’s too dry. If it slides off the hawk too easily or the trowel, then it’s too wet. 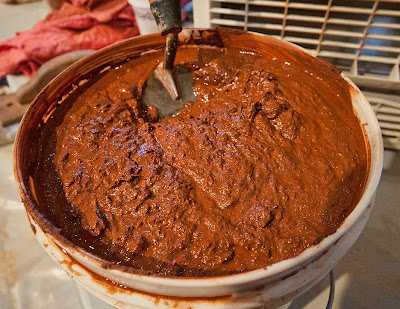 The Tools – The accompanying photo shows the tools we were using along with the ingredients, they are described in the notes below. For clarity, one doesn’t need the same tools that we use, I have included them here to show you what we commonly use in these kinds of situations. Similar results can be achieved with a variety of other types of plastering tools. There are a couple of items in the photo that aren’t covered below. One is the Japanese style wood plaster hawk, used to hold the plaster being applied to the wall. The ones we use are copies of ones used in Japan, made by our son Oso. The red spatula shown is for cleaning miscellaneous buckets and tools. 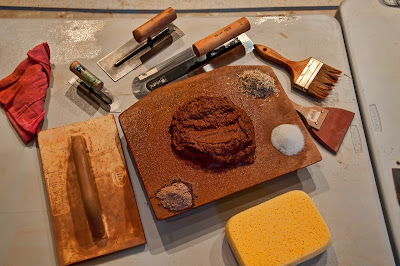 Tools with the dry plaster ingredients on the wood hawk.

Keeping the plaster environment clean is essential especially in a museum. I like to keep two pairs of slip-on shoes when working. One pair of rubber clogs to wear while plastering and another pair of slip-ons to put on when leaving the plastering area. In the museum they put down masonite to cover the floor with plastic edging. Our Japanese friends Ogin and Atsushi had a neat trick, they put down gloves to step on before leaving the work area to clean the bottoms of their shoes. 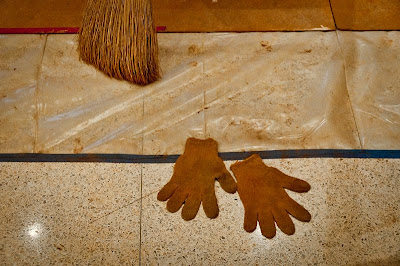 The Application – The plaster was applied in two coats. The first coat was the thickest, applied and leveled using a poly float (made in Germany). We bought ours in Denmark. A search on line under German poly floats will usually yield a source for them. They’re great when you have other people helping and applying plaster that don’t have a lot of experience. They even out any mistakes, giving a uniform look to everyone’s work. It’s the yellow rectangular tool in the photo. I find them far superior to wood and they’re lightweight as well. 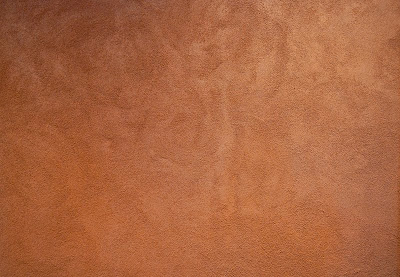 The second coat was applied using the same mix. It is applied soon after the first has been floated. It is not applied very thickly, but rather just enough to even out the first coat, filling any holes and depressions. To further refine the surface we typically go over it with a damp paintbrush, gently moving the plaster as needed, followed by the trowel again.

For application, we used rectangular Japanese carbon steel (medium gauge) trowels. They have just a bit of flex that works well with finer grade plasters. These trowels are available from Tom and Satomi Lander at: www.landerland.com. They also have stainless steel versions. 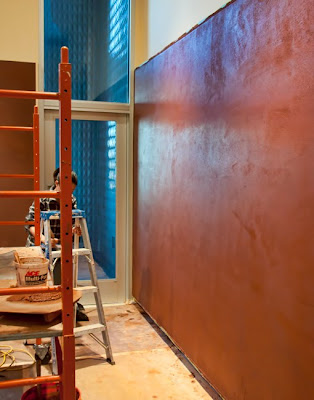 Application of the final layer.

Once we have gone over the plaster with the paintbrush, we follow with a large flexible trowel that has a rounded top, like an American pool trowel, using smooth and even strokes to further even out the plaster. Also available from Tom and Satomi. We also used a small flexible trowel with pointed tip for detailing around the edges and corners. 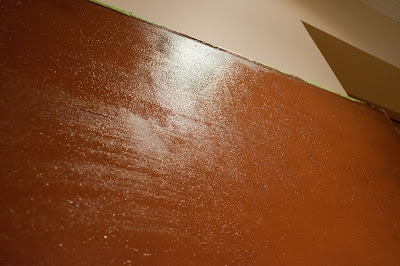 After smoothing with the large flexible trowel.

The Final Steps – Once the plaster has set (not dry), but won’t smear with finger movement or depress, we go over the surface with a damp tile sponge to reveal the straw. At this stage, it is possible to use a flexible trowel to push any straw back into the plaster that has been left on the surface due to the sponging. 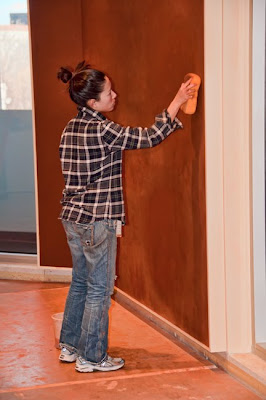 Ogin sponging the walls to reveal the straw. 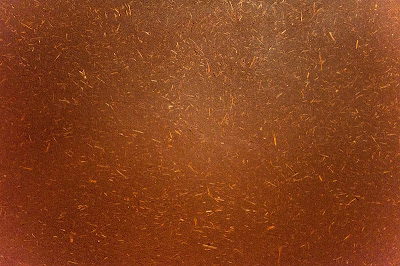