Our blog has been quiet for the last several months for a variety of reasons, but mostly due to the arrival of warmer weather and a shift to outdoor work. There are always a multitude of things that need fixing or maintenance, the vegetable garden needs tending along with what has been the major project of the summer – the remodeling of the original straw bale cottage that we built back in 1990. Most of my past blog posts during the winter were largely image driven and since I haven’t spent much time with the camera, some of my motivation has been missing. This past winter Mexico was great in that we had nothing else to do, but absorb the contrast we were experiencing to life here in the States. The intensity and passion of life there provide constant opportunities for good photographs.

However, I got somewhat of a wake-up call recently from readers complaining about the lack of posts to the blog. So what else to do, but write something. Otherwise I’d be overtaken by guilt and the pressure to accomplish something. So here begins an account of some of what we’ve been up to here at home.

Southeastern Arizona, spring through early summer, is a period of waiting for rain. It’s a time of contrast, the cottonwoods and other local trees, burst forth with vibrant green leaves as the overall landscape becomes increasingly dry. In what amounts to somewhat of a reverse autumn, the leaves of the local oaks turn orange and yellow, drop their leaves and provided it has been a winter of average moisture, immediately sprout new green leaves. 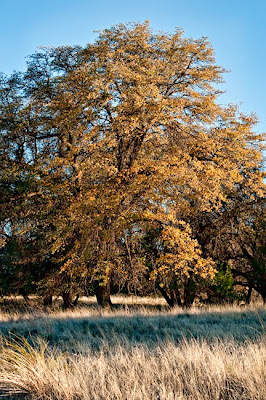 Emory Oak getting ready to drop its leaves, early May. 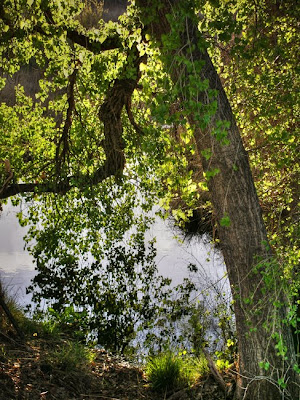 The sky, normally a rich deep blue, fades and desaturates. We repeatedly comment to one another how gray everything appears. 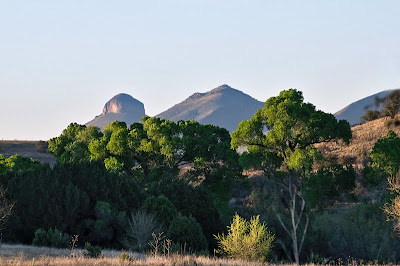 The heat steadily increases, typically reaching its summer peak during the month of June. The humidity drops steadily to what feels like a negative value. 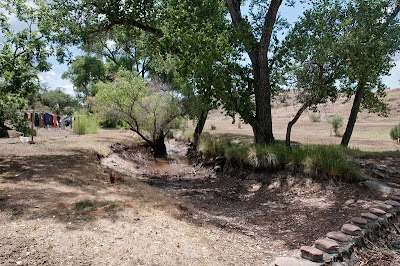 Turkey Creek in front of our house, normally full of water, dries during the months of May and June, waiting for the monsoon rains to make it flow again.

In the midst of this somewhat harsh landscape, many of the local plants, notably the cactae and agave families, attempt a balancing act with displays of brightly colored flowers. 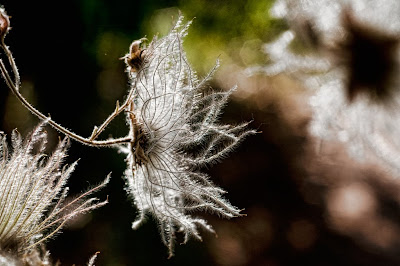 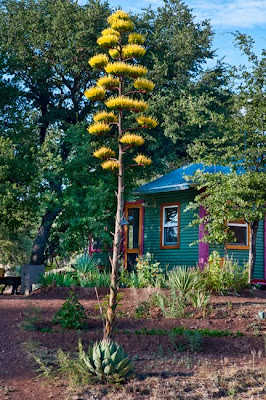 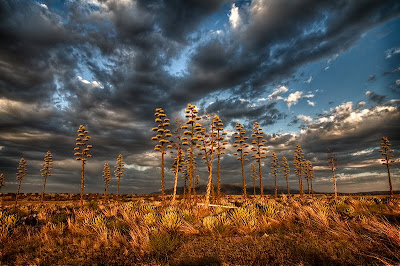 Forest of Huachuca agaves near our home. 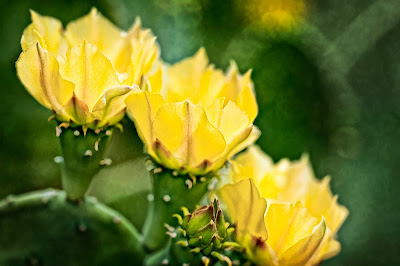 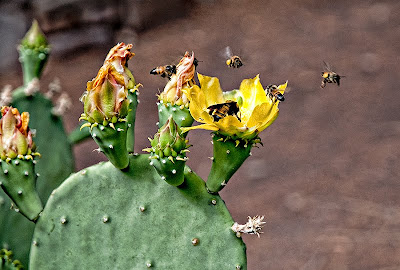 Bees in mass visit the prickly pear flowers in the morning, finishing their work around mid-day. 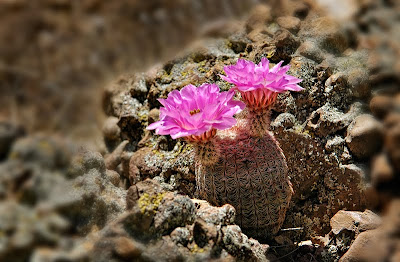 Spring bird arrivals contribute as well – Vermilion Flycatchers, Orioles and Scarlet Tanagers. It’s a fascinating time as well for wild edible plants, but more on that in another post. 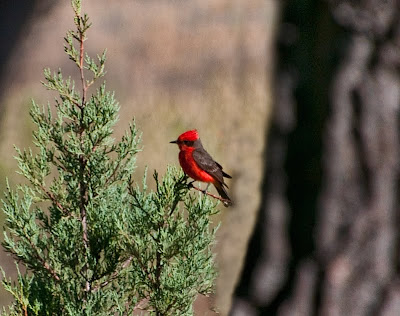 By the end of June, it’s easy to get the feeling that it’s never going to rain again and that the summer will be a bust when it comes to moisture. Although common sense dictates otherwise, there comes a point when one is absolutely convinced that it will not rain. Even the wisest succumb to this temptation.

It is this heating and drying that coaxes the jet stream gradually northward and in turn, the winds shift to a more southerly direction bringing humid air from the Sea of Cortez and the Gulf of Mexico. Large cumulonimbus clouds (thunderheads) appear as the humid air combines with the summer heat, signaling the beginning of what is called the “monsoon season.” During that period we can receive up to as much as 50% of our annual rainfall. These rains, “las aguas,” as they called in Mexico, ultimately arrive and relieve the tension that has been building for months in the landscape, people, plants and animals. June 24th, San Juan’s Day, is considered by many to be the beginning of the summer monsoon season, but my experience suggests that this date applies to the region further south in Mexico, For the most part, the 4th of July seems a more realistic date. 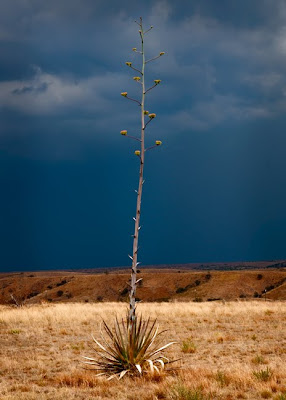 Palmer’s agave blooming at the beginning of the monsoon season.

In this part of the world where water is scarce, especially true for those who are closely tied to agriculture, the monsoon rains are a critical life event. Good monsoon rains are reasons for celebration. They make people happy, possibly ecstatic, bringing prosperity and health instead of depression, famine and sometimes death. Whether one is religious or not, everyone knows that they are “gifts of the gods.” When they are late, even the non-religious can be found praying and making offerings. 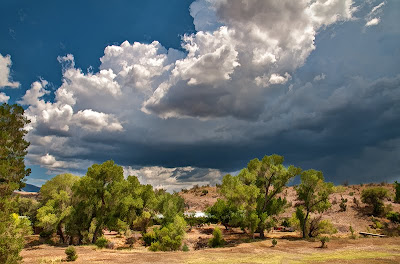 Early July, the skies darkening over our home for an afternoon rain.

The monsoon arrival takes many forms, sometimes it struggles and stutters, sometimes with a furious downpours that last for weeks on end. This year, through the early part of July, the monsoon stuttered with occasional brief showers that typically bring little more than frustration and fear that the monsoon will amount to little more. It is only when the fury of a fierce downpour happens that one’s confidence is restored in the goodness of the universe. However, it is essential that the first downpour be followed relatively soon by another, otherwise doubt and depression can easily return. 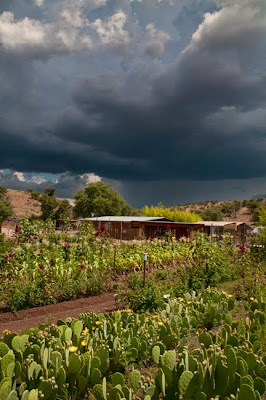 Once the rains start, we rarely irrigate the garden the months of July, August. 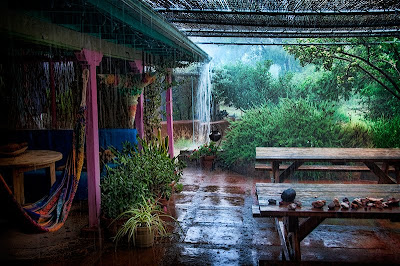 Our patio with an afternoon shower. 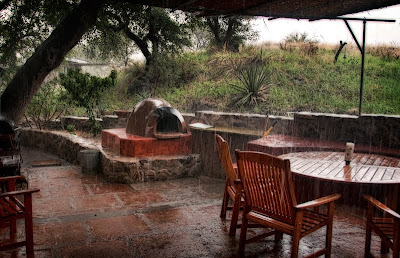 Summer pizza in the clay oven delayed by rain.

From the early signs, it looks like this year might be somewhere in between. We’ve had two heavy downpours and numerous light showers. The grass is turning green, most days are overcast, the dew point is hovering around 60, humidity ranges from 50 to 75% and the temperatures have settled back down into the 80s where they will most likely stay until September. To say the very least, it’s an amazingly comfortable and beautiful time of year, just about as close to perfect as one can get. 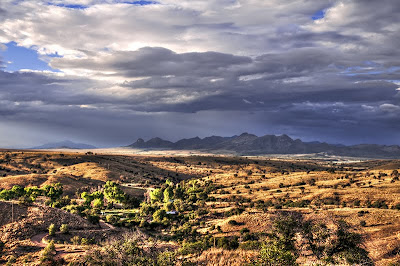 Turkey Creek in Canelo after a rain. On the average, thundershowers last anywhere from 15 minutes to an hour, after which the skies usually clear, leaving a soft beautiful light behind.