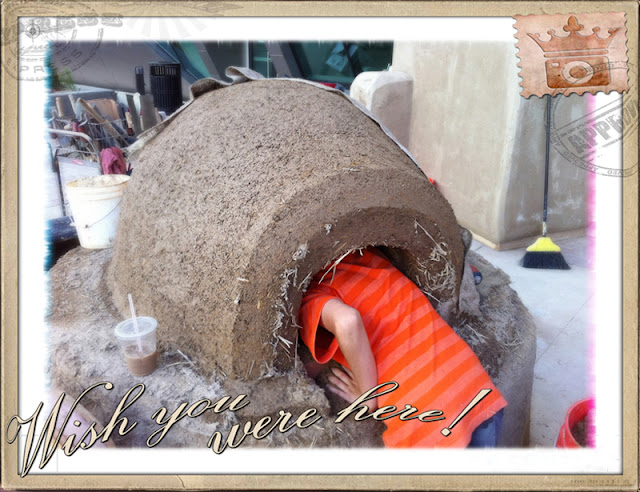 After two weekends, the week in between, one thing stands out for me above all else.  Kids and mud to put it simply.  To be quite truthful, I haven’t thought about it much, typically when we either teach a workshop or do some sort of project, it primarily focuses on the work at hand or communicating an assortment of techniques that people can take home with them for their own use.  I can’t remember anytime in the recent past when we were charged with the task of creating an opportunity for families, mostly kids, to play in the mud under the auspices of making something.  It’s true we’re creating some forms that in the end will look good and more than likely people will admire, but what will stick in my mind is the overwhelming  enthusiasm and total outright abandon that the kids who come to participate literally throw themselves into the mud.  Watching them, it’s like they’ve been waiting all their lives to be given permission to grab handfuls of mud and play, shape and create with no one to tell them no.  I don’t want to turn this into one of those discussions that talks about how today’s children are cut off from nature, don’t have a chance to work with the soils in a garden, have not developed their immune systems because they are not allowed to play in the dirt, that’s not my point, although most of that may be true.  What’s caught my attention here is something else, how they go from zero to 60 in less than a second when given permission to go at playing in the mud when given the opportunity.  I should also mention that their involvement has been limited to their hands and feet with aprons to keep their clothes clean, but had we had some other attire, a way to clean them off, I have no doubt that a full blown mud slide or an arena for them to throw mud at one another would have been a great addition.

So much of what I’m saying is that all this here in Denver has given me a new perspective about some things I’ve known intellectually, it’s just been a while when it’s been brought so directly to my attention.  And that is, kids today are indeed way out of touch with the earth they live upon and I’m not talking about the globe as a whole, but rather the ground beneath their feet.  Once again, I’m not trying to make this into an issue, it’s rather I’ve had the experiencing a whole bunch of kids just having nothing short of loads of fun.  A few adults get their hands into it as well, mostly museum staff, especially our boss Emilie Lewis, who, when on site with us, abandons her supervision duties to join to the fun.  The other notable thing is that most of them literally have to be dragged away, not screaming, haven’t seen that yet, but reluctantly to say the least.  They do not tire and I even watched one of them telling their parents that they could go home and perhaps we would be available to take her home.  Another very fun thing about a lot of these kids is how outspoken they are.  Had I anticipated the comments they come up with, I’d have been recording them on an ongoing basis.

So in the course of the last 10 days, we’ve built a clay oven, provided a wall where the kids could try plastering with clay, they’ve mixed with their hands, their feet, different consistencies of mud to be used on the oven, for seating and sculpture.  Tomorrow we start our last 5 days of work at the museum, our progress and the time available will define how much more we do.

I don’t know who conceived of this summer program, Marvelous Mud, but it was a fabulous idea.  There are fabulous exhibits centered on the different uses of clay, next to us, just inside the building, is a clay studio where kids are given the opportunity to hand shape ceramic forms and throw pots on the wheel, visiting artists also give demonstrations during the weekends.  The only fault I can find is that it could have been ten times bigger and more inclusive, but that’s not really a fault to say the least.  With that, I’ll let these photos speak for what I’ve written. 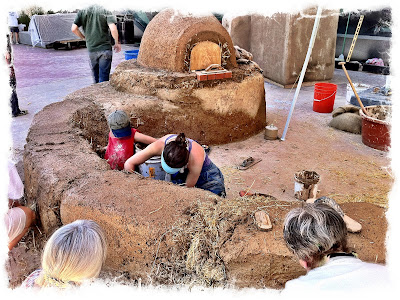 As for me, I am also there working, as is our son Benito, his girlfriend Brittany, Kalin every now and then.  Handiest and most fun thing so far has been the iPhone in addition to the project.  All the above photos were taken and processed with it.  I keep it in my back pocket and a rag handy to clean my hands, otherwise I’m ready to go at a moment’s notice.  I really don’t know much about the great black and white photographer Henri Cartier Bresson, but he did most of his work on a very simple camera with one lens, this feels like a similar exercise in simplicity.  Although the capacity of the phone to process the images on the phone opens up a whole new world.
Concluding video of mixing for the oven.
Back to Top