Our workshop in France had an additional workshop within our workshop. Two Moroccan/French masons were there to teach “tadelakt,” a method of burnishing or polishing lime plaster and then sealing it with black olive oil soap. We had brief exposure to it some years ago from a young guy who had studied it in Morocco. Since then, we’ve collected numerous accounts of how it is done and as one would expect, those accounts differed enough to make our French opportunity all that more valuable.

It would be difficult to find two people as delightful and graceful as the two masons who were there to teach. We developed a very good relationship with both Mr Abdelilah Alaoui Nadir and Ben Mesk Mustapha, who reside in France and Morocco, due to their dual citizenship. They did not restrict themselves to their tadelakt work, but eagerly participated in all that we were doing including plasters, earth floors and carving. By the end of the week, Mustapha was putting straw in the tadelakt. When watching me do a Japanese “tataki” floor sample, he smiled and told me that the Moroccans did a very similar floor called “tadaka.” The two of them work together through the company Maroc Design and if you would like to see more of their work visit their website: www.marocdesign.fr In addition to walls, baths and the like, they specialize in the traditional Moroccan “wet sauna” called a “Haman.” They were eager to come and visit and spend time with us so watch our website for any future “tadelakt” workshop announcements. 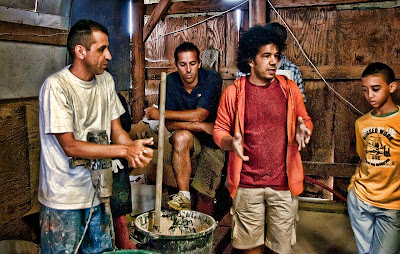 Alaoui on the left, Mustapha to the right.

Note: What follows here is a moderately detailed account of how tadelakt is done.

What makes tadelakt different from other lime plastering techniques? Specifically, it is Moroccan lime that is sealed with black olive oil soap and burnished with a stone. It’s important to understand that, like most traditional practices, tadelakt is based on materials that are locally available and hold no particular magic in themselves. For example, the Mexicans also apply a waterproofed lime plaster to the exterior roof surface of masonry vaults and domes by using a technique that is virtually the same. The lime is burnished with a stone and instead of olive oil soap, they use a common animal fat based soap in combination with alum (aluminum potassium sulfate) to seal the surface.

Moroccan lime differs greatly from the white powdered substance most people think of as lime. Most likely, the limestone is burnt using the old type of vertical shaft kilns and consequently it is rather poorly burnt and contains many small particles. I passed a sample of the Moroccan lime through several different sized sieves with the following result. 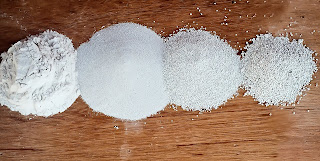 This is vastly different from the type S lime available in most developed countries where the requirement is that 95% of the particles are finer than 325 mesh. As you can see only a little over 25% of the Moroccan lime is finer than 100 mesh and I doubt that any of it would be as fine as 325. So for the most part, Moroccan lime is lime that has already been pre-mixed with various sizes of small aggregates. It is important to keep in mind that Moroccan limes will also vary according to the producer.

Another major difference is that the Moroccan lime has some of the characteristics of hydraulic lime and yet I would not classify it as a pure hydraulic lime. One difference is that it sets much faster than regular lime. The Moroccan lime that we used in France was soaked in water for one week, but not mixed. Mixing would cause it to set. Since this was a mix to be used for a floor, they added 30% fine sand. For a normal tadealkt finish coat, no sand is added as the lime itself has sufficient aggregate. 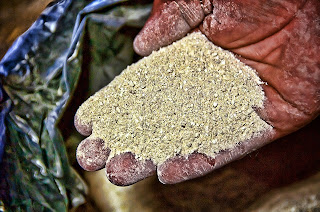 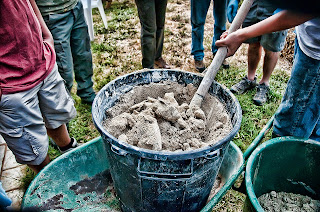 Moroccan lime that had soaked for one week.

So the question is whether or not one needs Moroccan lime to do tadelakt. In Morocco, it’s the only thing available and there are no other options. Rather than answer myself, I will give you Mustapha’s answer. He told me that he could send me all the Moroccan lime that wanted, but added that I should be able to come up with a suitable substitute at home. Does it need to have the hydraulic characteristics, I would say only if you need it to set more quickly. Then you might add a percentage of hydraulic lime to whatever lime you have available.

The floor in the workshop was done in two coats over an existing concrete floor that was somewhat rough and irregular. The first coat was done mostly done as an adhesion coat to the concrete and to provide a base coat for the finish coat of tadelakt that was to follow. They first added water to the lime and sand mix that had been soaking for a week and then mixed with a drill. They reminded us that in Morocco they mix by hand. They wasted no time in applying it to the floor with a mason’s trowel, not making much effort to smooth it out. To achieve a slightly roughed up surface for the finish coat, they immediately went over it with a small sponge paint roller. This coat was applied in the evening and by the next morning it had set hard enough that it could withstand foot traffic. 250 grams of rabbit skin sizing were added for every 20 kilos of lime as a glue to ensure adhesion to the concrete. They use the same mix when going over drywall and other wall surfaces. 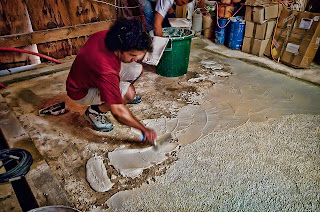 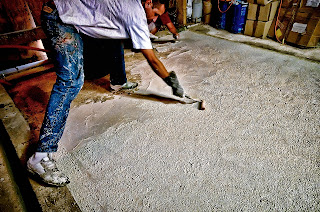 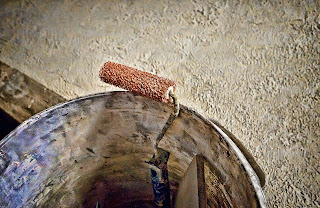 Before saying anything more, I should remind the reader that the account I’m presenting here is how tadelakt is practiced by these two masons and that the method can vary according to whoever is doing it. The next step was to apply the tadelakt finish coat. Pigment was added to the lime in the amount of 15% by volume, no sand was added. It was applied with a mason’s trowel, smoothing it out some in the process. The next step was going over it with a wood float to even out the surface. 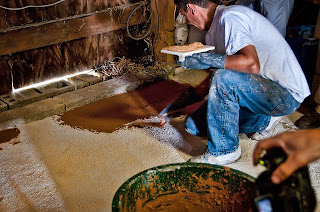 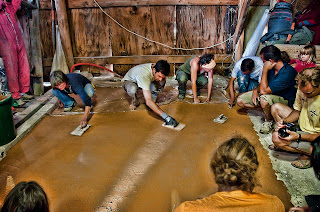 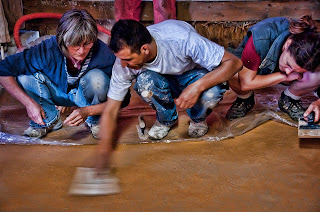 Alaoui demonstrating use of the wood float.

Because the existing floor was somewhat uneven, flexible trowels were used to even it out more. They explained that sometimes they use the trowels and then follow with the stones and at other times no trowels are used. It depends upon the wall surface. A rigid piece of plastic can also be used to further smoothing. The thickness of the plastic would be similar to what you would cut from a plastic quart of oil. Mustapha explained that the plastic is not used to burnish, but rather to even the surface and that it should only pass over the surface of the plaster only once. When the plaster has set sufficiently that a fingerprint is no longer visible, burnishing with a stone begins. If the cream rises to the top, then it is necessary to stop and wait. The stone is used to go over the surface of the lime in small consistent circular motions until one feels friction and the stone begins to drag. The sound the stone makes begins to change at that point. The stones, which are different sizes and shapes, you can see in the photo. They vary depending upon whether one needs to get into corners, hard to reach places, etc. Flip flop sandals they often use on corners. 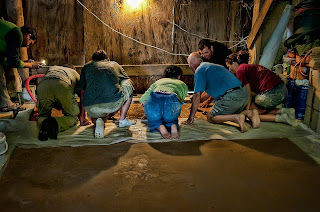 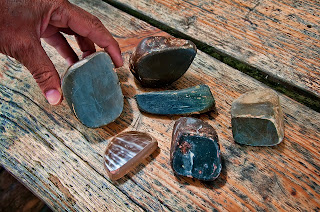 Variety of stones used for burnishing.

Once this is completed and the tadelakt has become even more firm, it is time to apply the soap. In France this was the next day. Black olive oil soap is used, however, the masons Alaoqui and Mustapha used a mix of olive oil and ash because it was cheaper. The soap is diluted 1 to 10 parts water, it is beaten with a whisk until it froths and then it is the foam that is applied to the tadelakt surface. Burnishing with the stone is repeated until resistance is felt. Once that happens, any excess soap is wiped off with a sponge. This can be repeated a number of times as long as there is moisture in the wall. 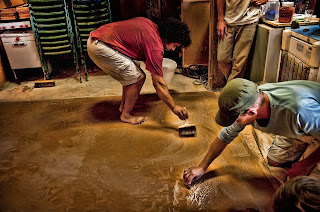 Olive oil soap being applied to floor with burnishing. 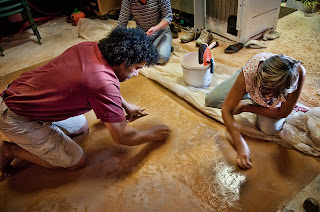 Burnishing of the soap. 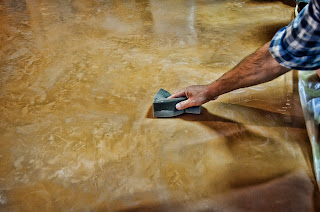 What happens is that oilve oil soap contains fatty acids that react with the lime and make a water insoluble soap that makes the wall waterproof and a nice polish possible. It’s very similar to the same chemical reaction that causes a ring in the bathtub when there is hard water. Oil from the skin in combination with the lime form a calcium soap that we commonly refer to as a bathtub ring. Olive oil soap is preferred in Morocco because olive trees are common and other soaps are largely unavailable. Will other soaps work? A visiting chemist told me that Dr. Bronners and similar soaps would produce the same result. We’ve watched the Mexicans for years use the cheap yellow bars of soap that you find in all Mexican markets to waterproof roofs and walls. What I’m trying to say is that there are probably a lot of different soaps that would work sufficiently well. While walking down a street market in France I noticed a soap vendor who had small tubs of the black soap for sale. I was curious about its advertised uses and it turned out that black olive oil soap is commonly used as a household soap for floors, general cleaning, something to do with animals, skin and leather care. I used it to restore my Merrell Jungle Mocs that withstood 2 months of wet clay, lime, rain and general abuse. They get my vote for the ultimate traveling shoe capable of many different types of activities that in my case included going to town, working in wet conditions, taking long walks, basically anything I needed to do. 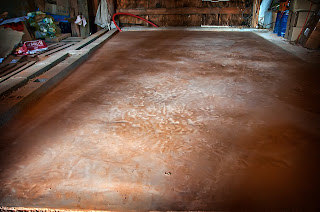 Finished floor in the process of drying.

On a concluding note, I loved working with both Alaoui and Mustapha. They were priceless in every sense of the word. I liked tadelakt for the simplicity of the method as well as the tools. It reminded me a great deal of the kind of simplicity we find in Mexico. In that the two of them expressed a strong desire to visit and spend time with us, check our website periodically for any announcements of possible workshops.