The Mescal Bacanora of Rancho Tepua

Bacanora, the regional mescal that comes from the state of Sonora, is a topic that could easily make for a long drawn out narrative, enriched with legends and tales of backcountry Mexico. For now, I’m going to resist any temptation to do so, that would be a sizeable undertaking, the very kind of thing that could end up being irresistibly time consuming.

Before we go any further I need to clear up any misconceptions about the word mescal, especially for my friends from other continents. The word mescal refers to the distilled liquor produced from the heart or core of the agave plant. The most famous mescal is what is called Tequila, made in the region of the state of Jalisco in southern Mexico. The product that most people think of when it comes to mescal is that which comes from the state of Oaxaca and has a grub from the agave moth in the bottle.

But here in the north of Mexico, we are not talking about either one, both of which are produced legally. Mescal bacanora has traditionally been a bootleg process in the state of Sonora for hundreds of years. It is made from the agave pacifica and is a great source of regional pride for the area because when it is made well, it can be superior in taste and quality to some of Mexico’s finest tequilas. Discussions about its merits and health giving properties can go well into the night. Even the Jesuit missionary of Ignaz Pfefferkorn, who arrived in Sonora in the mid 1700s, stricken with vomiting and diarrhea, praised it for completely restoring his health. His journal, written during his stay in Sonora, is a must and a great read for anyone wanting to become familiar with the history of the state. Sonora: A Description of the Province – http://www.amazon.com/s/ref=nb_sb_noss?url=search-alias%3Daps&field-keywords=Ignaz+Pfefferkorn&x=0&y=0

In recent times, population growth and increased demand, have greatly reduced the wild populations of agave pacifica from which bacanora is made. This has made it increasingly difficult for the mescaleros (the makers of mescal) to find enough wild plants to produce a batch. To compensate for this, it became common to use fewer plants and offset the difference with refined sugar. The mescal that results still has some of the traditional flavor, but with a much harsher taste. Such practices have caused the quality of mescal being made in the region to deteriorate significantly. 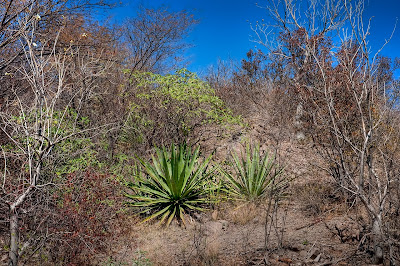 Pacifica agaves in the wild.

Another consequence resulting from the over-harvesting of wild agaves is that it has affected the populations of the long nosed bats, Leptonycteris. The flowers of the agaves are primarily bat pollinated and depend upon these bats showing up when the plants are flowering. In other words, fewer plants most likely translates into reduced bat populations. That is a much bigger story, but for a much fuller account, along with what might be the best account on mescal bacanora in print, read the chapter Mescal Bacanora: Drinking Away the Centuries in Gary Nabhan’s fun book, Gathering the Desert. http://www.amazon.com/Gathering-Desert-Gary-Paul-Nabhan/dp/0816510148/ref=sr_1_1?ie=UTF8&s=books&qid=1266601968&sr=8-1

On our last trip to the Rio Sonora, we spent a day at Rancho Tepua, a ranch owned by Roberto and Lupita Contreras Mayoral, where they are engaged in an extensive effort to produce a very high quality mescal bacanora. Not only is the setting of their ranch beautiful, tucked away into the foothills of the mountains, as a couple they are equally beautiful and hospitable. 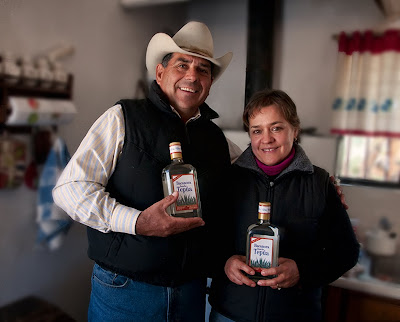 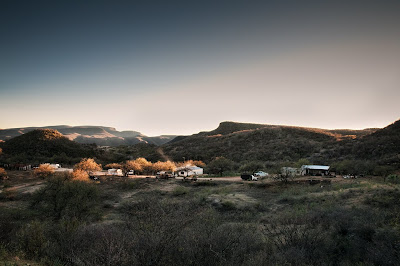 The main buildings at Rancho Tepua. 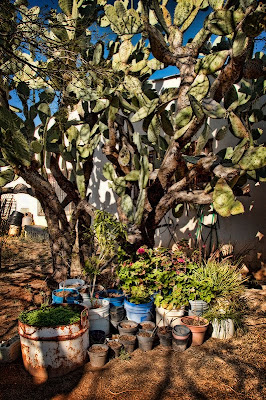 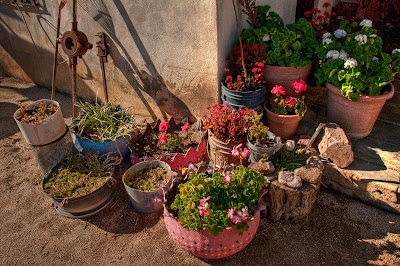 A nopal or prickly pear cactus and flowers around the main house.

Roberto has secured the licensing necessary to legally produce his mescal and sell it in retail outlets. This government stamp also certifies that his product has been inspected and is free from any harmful ingredients. Despite these positives, I was still somewhat leery of what I might find in that over the years I have sampled a number of commercially bottled mescal bacanora products and all of them have been, for the most part, terrible. What I found at Roberto’s ranch was a great surprise, nothing less than a very finely crafted mescal bacanora that embodied the finest traditions of Sonoran mescal making in combination with modern methodology and research. And since fine quality bacanora is for sipping, not for shots, flavor and quality are paramount. 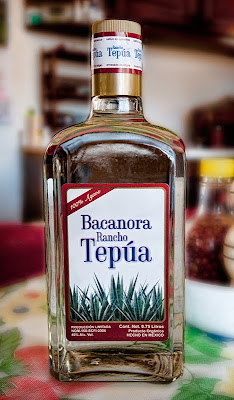 Roberto has been working in conjunction with CIAD, the Institute for Research in Food and Development, located in the city of Hermosillo, capital of the state of Sonora. Together, they have worked to create a high quality product, the process of which can be of benefit to other individual makers or aspiring producers. In their work, they have identified approximately 150 variants of the species agave pacifica and narrowed those down to somewhere around 15 that are best suited to mescal production. That in itself is a major accomplishment. Instead of relying on wild yeasts, they began work experimenting with over 50 different strains of yeast and eventually narrowed those down to a handful that not only shortened the time needed for fermentation, but that also produced the best flavor.

Conscious of the over-harvesting of the wild agaves, Roberto has begun a program of breeding the agaves he will need for the future. Currently he has over 150,000 plants that he has transplanted to the hills around the main ranch complex. Many think that the ideal conditions for the agave pacifica is land where the white barked palo blanco tree (acacia willardiana) is found growing. This tree is found in abundant concentrations on Rancho Tepua. 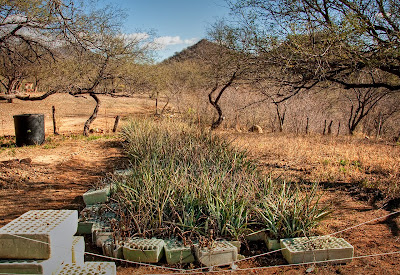 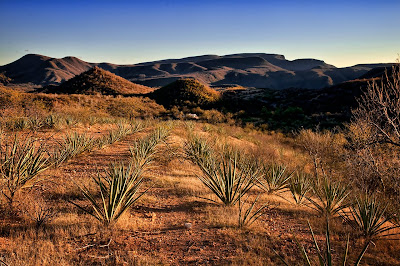 Plantings on the ranch. 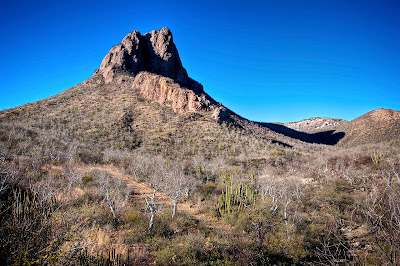 The rest of the process is very traditional. The agave hearts are baked on mesquite coals over a 36 hour period in a pit that is lined with brick. The wood fired pit imparts a smoky flavor to the mescal that is no longer present in modern tequilas that use gas ovens. The cooked hearts are then mashed up to prepare them for fermenting. Traditionally the hearts were mashed using the butt of an axe, which I can testify is a whole lot of work. Instead, Roberto has begun using a pair of chipper shredders from Sears . Once mashed, the fiber is combined with water and yeast in plastic drums, covered tightly to keep out fruit flies and left to ferment. 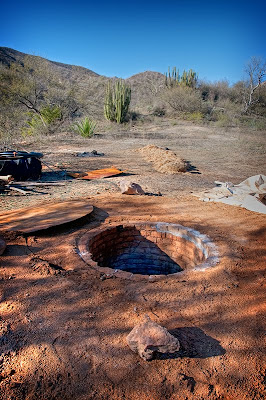 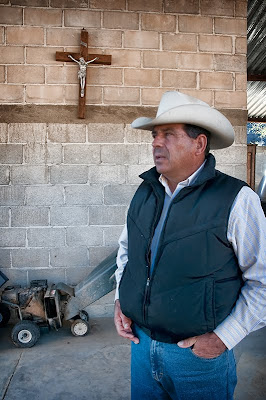 Baking pit for the agaves and Roberto with chipper shredder in background.

Roberto built his own stills, he has a pair, out of stainless steel with copper tubing. He hauls local spring water, which he stores next to the stills and claims that it is essential to produce the finest mescal. From there, his distilled product is transported to Hermosillo where it is bottled. Currently it is only available in Mexico, but soon will be imported to Tucson, AZ. 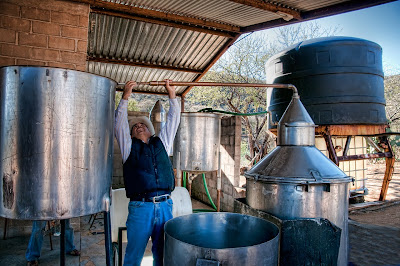 Roberto with one of his two stills.

Sorry to say I don’t have any photos of the process itself from harvesting to baking and distilling. Hopefully that will happen in subsequent visits to the ranch. For now, I wanted to introduce you to something that is very Sonoran and little known outside Mexico, for that matter the state of Sonora. 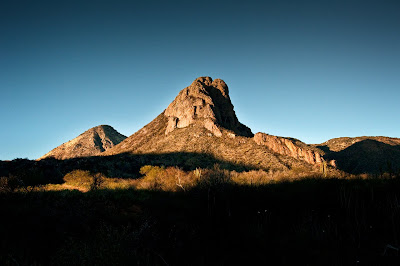 Athena has been taking photos as well, which for me, is great in that she’s got a great eye and always manages to see things that escape me. She caught this photos as we were leaving the ranch for our return back to the town of Banamichi. The above photos of the nopal, flower pots and seedlings are also by her.